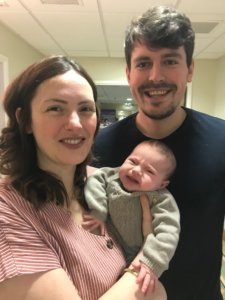 Maternity specialists are being encouraged to change the language they use in front of mothers to have a positive impact on the birth experience.

A new video, filmed at Liverpool Women’s Hospital, is promoting better use of language. You can see the full film below.

Consultant obstetrician Professor Andrew Weeks said: “Words such as hemorrhage, fetal distress, membrane rupture may be common for medics but they conjure up quite terrifying images in peoples’ heads. Labour is a sensitive time, when we speak to mothers years later, they can sometimes remember every single word used at a time of heightened emotion.

“Think about the words you are using and avoid violent language because how we give care is as important as the care we give.”

Liverpool’s Dr Natalie Mobbs became a mother for the first time last year and spoke to midwives before the birth. “Instead of using the word ‘contraction’ which means tightening up, I asked us to use the word ‘surges’ which helped me stay more relaxed.

“Language matters as a way of respecting women’s views and ensuring that they are empowered to make decisions.”

Mum Adinny Sigalingging had a really positive experience at the Women’s Hospital and said: “When the midwives used the correct language they made me very calm and it helped me become confident and the birth happened very quickly.”

The film follows on from recent NICE Intrapartum Care Guidelines, which states: “demonstrate, through their own words and behaviour, appropriate ways of relating to and talking about women and their birth companion(s), and of talking about birth and the choices to be made when giving birth.”

The guideline envisages “a culture of respect for each woman” and the clinician should “ensure that the woman is in control of and involved in what is happening to her, and recognise that the way in which care is given is key to this.”

Professor Weeks said: “Positive communication throughout birth significantly affects the woman’s experience, which can affect both her mental and physical health, as well as her relationship with her baby postnatally.

“In maternity care, this can be seen through improved outcomes by simply having a labour companion: a systematic review shows that it reduces caesarean rates, operative vaginal births, use of analgesia, and negative feelings regarding the birth experience. Not due to any clinical intervention, but simply due to the provision of support”.