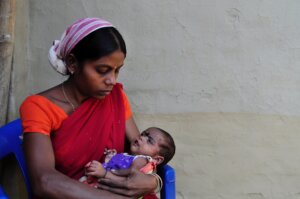 The India Birth Network aims to improve the experiences of mothers and babies across the country.

While maternal and newborn outcomes are improving in India, there are several states that are still lagging behind. If improvement is not accelerated the country will not meet Sustainable Development Goals and the Every Newborn Action Plan Goals for maternal and neonatal mortality and stillbirth

The focus of the India Birth Network is the development of maternity services in government hospitals in five of the worst performing areas – Madhya Pradesh, Odisha, Uttarakhand, Uttar Pradesh and Bihar.

The network aims to empower staff by sharing best practice and developing international and national partnerships (mentor to mentor, mentor to participant and peer to peer) to support research, particularly in institutions with less experience in this area.

Evidence-based, pragmatic intrapartum care, delivered by multi-disciplinary teams is critical to give women the best birth experience and babies the best start in life. However, in India a lack of standardised care can make this a major challenge. The well-recognised phenomenon of ‘too little too late’ and ‘too much too soon’ has led to poor outcomes for mother and child, alongside very high caesarean section rates.

Appropriately trained Nurse Midwives, with international partnerships, can play a vital role in strengthening the function of the overcrowded and understaffed birthing units. The network aims to foster the development of these roles and help research become a more routine part of maternity care in India, ensuring women’s experiences are monitored, recorded and learned from.

The network brings together midwives, doctors and researchers from across the globe to focus on improving outcomes for mothers and babies in India. It is doing this through two workshops – the first of which was held online in October with some of the outputs and presentations being captured by a graphic artist you can see here. 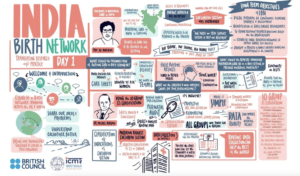 This is to be followed by a face-to-face workshop, held jointly in India and the UK in January, to allow participants to meet and build on the relationships formed, to help facilitate research projects.

The network is supported by Christian Medical College (CMC) Vellore, one of India’s leading medical institutions, and Liverpool’s Sanyu Research Unit, which is dedicated to improving maternity care worldwide, particularly in poorer settings. Graphic notes from the first meeting of the India Birth Network